So, you have a horse that is termed an "easy keeper" because it seems, he gains weigh on thin air. Equine Metabolic Syndrome (EMS) likely begins with a genetic pre-disposition and certain breeds of horses and ponies are prone to developing this issue. Being very efficient at utilizing calories, these horses often require a lower plane of nutrition to maintain body weight. Sugars in grass are one factor that carry severe consequences to the laminae and no horse is immune to the effects.

Aiding in proper blood sugar management is essential for horses who have a tendency toward EMS. I.R.Support is designed to support the insulin resistant horse using several elements researched and chosen for their favorable effect on  insulin sensitivity and blood glucose levels. Feed I.R. Support in addition to managing the amount of grass they are exposed to, and here's why: Your best defense is a good offense and it's always better to support a healthy body than it is to rehabilitate one.

The science behind the formula:

Magnesium - is a key mineral that affects both insulin secretion and action and is therefore important in glucose homeostasis.  Typically insulin resistant horses and ponies are on limited hay/pasture diets, which limits the amount of nutrients in their diet.  This generally translates to low intracellular magnesium levels, resulting in impaired insulin function.  So, direct supplementation is often the most effective way to assure the mineral is available to support proper insulin function.

Chromium - works together with insulin produced by the pancreas to metabolize carbohydrates.  It is known for its role in reducing blood glucose [sugar] levels after meals. Pagan et al. (1995) reported that supplementing performance horses with 5 mg/day of chromium had a beneficial effect on the response of horses to exercise stress. Horses were subjected to a standardized exercise test on a high speed treadmill and blood and heart rate were monitored. Horses receiving chromium cleared blood glucose following a meal more quickly than control horses and showed lower peak insulin values and lower cortisol levels. Chromium supplemented horses also had higher triglyceride values during exercise indicating perhaps more efficient fat mobilization.

Cinnamon - Animal and in vitro studies have indicated that cinnamon may mimic the effects of insulin, act as an insulin sensitizer, and improve cellular glucose uptake and glycogen synthesis.

Fenugreek - is traditionally used to slow gastric emptying, and delay absorption of glucose from the gastrointestinal tract.  This may help to reduce the effects of the heavy glycemic load of high carbohydrate meals and allow for a lower, more stable blood glucose level.

Typical nutrient deficiencies found in horses on a limited diet of hay and pasture include: zinc, copper, selenium & vitamin  E - for this reason we have included additional supplementation of these elements as well.
Go to Product Page: I . R. Support
Previous Post
Next Post 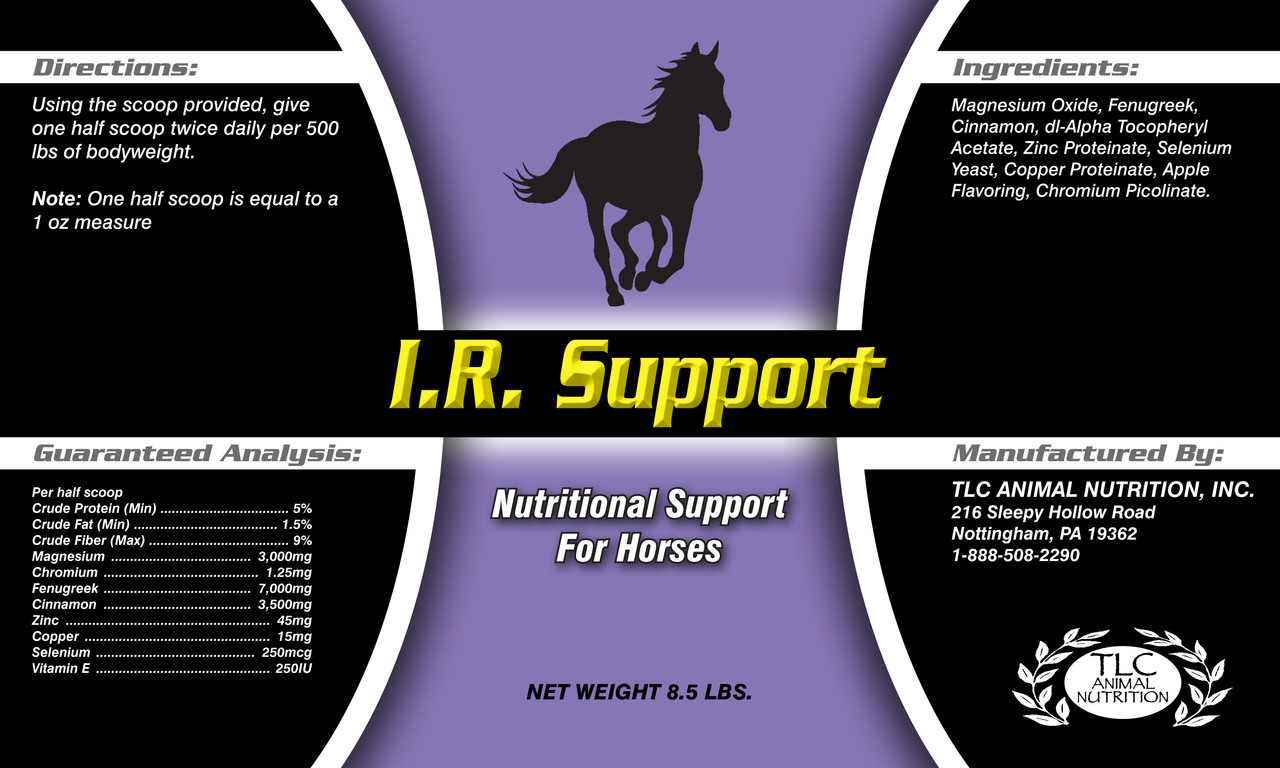